Alcatraz is a drama series airing on Fox. It was concieved by Steven Lilien, Bryan Wynbrandt and Elizabeth Sarnoff, a former writer of Deadwood and Lost. 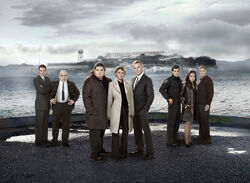 When Detective Rebecca Madsen is assigned to a grisly homicide case, a fingerprint leads her to a shocking suspect: Jack Sylvane, a former Alcatraz inmate who died decades ago. With her investigation impeded by government agent Emerson Hauser, Madsen teams up with Alcatraz expert and comic book enthusiast Dr. Diego Soto. They both soon discover that Sylvane is not only alive, but he’s loose on the streets of San Francisco, leaving bodies in his wake, and does not appear to age. With the inclusion of Agent Hauser, they realize that Sylvane is only a small part of a much larger, more sinister present-day threat. For while he may be the first, it quickly becomes clear that Sylvane won’t be the last prisoner to reappear from Alcatraz. 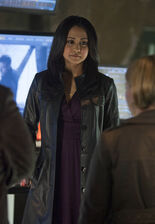 "Pilot" is the first episode of season 1, and overall the first produced hour of Alcatraz. It originally aired on January 16, 2012, as part of the two-hour series premiere. A murder case leads police detective Rebecca Madsen and Alcatraz expert Diego Soto to discover that Jack Sylvane, a supposedly dead Alcatraz inmate, is still alive and hasn't aged a day. With the help of government agent Emerson Hauser, they soon discover that Sylvane is only a small part of a much larger, more sinister present-day threat. (more...)


Refresh for another quote

Alcatraz has been cancelled

I am sad to report that Alcatraz has been cancelled. Go to spoiler tv.com for more info, hopefully it will be brought back in the future.

I honestly can see these character centric episodes for season 2