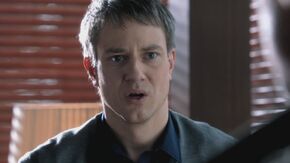 Barclay Flynn was a British-American citizen who lived in modern day San Francisco. He was shot by Jack Sylvane after giving him a soft black bag containing a key.

For unknown reasons, Flynn recognised Jack Sylvane after he shot two SFPD officers and locked and bolted his door for safety. However, after Sylvane entered his house through other means, he did not know what Sylvane wanted so he offered him money instead. Sylvane demanded a soft black bag from Flynn who handed it to him from his safe. Although being questioned about it during the episode "Ernest Cobb," Jack did not know why he went for the key and said "I only did what they told me".

Flynn was shot by Sylvane after he obtained the bag, which contained one of the Warden's secret keys. Rebecca Madsen later researched Flynn, but could not find any connection to Sylvane or Alcatraz.It is unknown that the reason he had the key is Harlan gave it to him.

Retrieved from "https://alcatraz.fandom.com/wiki/Barclay_Flynn?oldid=10074"
Community content is available under CC-BY-SA unless otherwise noted.