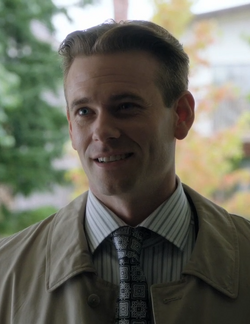 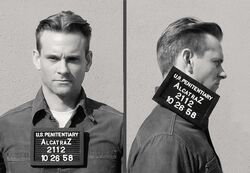 Cal Sweeney suffered a severe loss of family and possessions at the age of ten, when a fire killed all his living relatives and damaged all of his personal belongings, leaving him with nothing but a little tin box, which became his only personal possession in Alcatraz, something that would ultimately get him into trouble later.

In the late 1950's, Cal Sweeney robbed over 20 banks, each time robbing only the safe deposit boxes, and not the vault. The main reason for this was because many bank customers kept their valuable items in their deposit

boxes, and in 2012, it emerged that he had an interest in personal items. Furthermore, the robbery of only deposit boxes was not a federal crime. Despite this, Sweeney was then incarcerated in Alcatraz in 1958.

After his incarceration, Sweeney mainly worked in the laundry, lecturing his fellow inmate, Harlan, on how to run a good business - the key points being "showing no weak point." Sweeney began a business by inserting requested contraband items into the pockets of inmate clothing. He mainly resorted to charging unfair prices for inmates who did not pay on time.

Eventually, E.B. Tiller became interested with the enterprise and "tossed" Sweeney's cell for any valuables he could hold take hostage. Tiller wanted a share in Sweeney's profits, although the latter claimed that until he retrieved his only personal possession, his little tin box, that he thought Tiller took when his cell was ransacked, he was "closed for business." Tiller claimed truthfully that he did not know what Sweeney was talking about.

Angered, Sweeney and Harlan formulated a plan to bribe a steward named Red with cigarettes, so that he could fake an ailment, allowing Sweeney to substitute him as a steward in the Warden Edwin James' house, for the birthday party of E.B. Tiller. Harlan, also a steward, purposely poured tea on Tillers hand to make him go to the toilet, leaving Sweeney and Tiller alone. Tiller demanded his box back, for a business partnership of 50%. Enraged by Tillers constant protests regarding the box, the two got into a fight, resulting in Sweeney being forced to serve 30 days in Solitary confinement.

Before being taken to Solitary, Sweeney learned that Harlan took his box, stating that his close bond with this possession showed a sign of weakness -

something Sweeney lectured other inmates on, in the laundry. In fury, Sweeney crushes the box, before being taken to solitary.

He was stationed in a mysterious room behind a huge door below the solitary cells, which required three keys to open. Two of these were found in 2012 by the Alcatraz Task Force, from Jack Sylvane and Sweeney himself.

Sweeney resurfaced and robbed a total of three banks in 2012. He managed to enter the deposit box vaults by flirting with middle-aged single tellers before the robberies, and used the vaults as an area to flirt with them one last time before he drugged them.

At his second choice of robbery, Colonial Liberty Bank, he chose a teller named Amanda to socialise with, allowing access down to the deposit boxes. After drugging her and killing a banker who was in danger of finding the unconscious body, he robbed a few boxes before going to the residence of William Bailey, the owner of the most valuable box. Introducing himself as Peter Carr from the Colonial Liberty Bank, Sweeney "regretfully" informed Bailey that the boxes had been robbed and he would like to get started with the insurance claim.

In reality, Sweeney only wanted to know if there was anything special about the sapphire platinum necklace which Bailey gave to his wife on their 25th wedding anniversary. Sweeney killed Bailey after the latter threatened to call the bank.

After finding Bailey's body, Rebecca Madsen and Diego Soto investigated the connections between another murder committed by Sweeney, of a man who had a valuable deposit box in the first bank, named Leonard Shore, though there was no connection between the murders. However, they managed to find a connection between the banker victims - always aged 50-60, and were always single, presented with the same flowers.

Soto and Madsen researched the source of the flowers and managed to track them to Mae's Flowers. Mae, the shop owner, managed to produce a list of banks Sweeney sent flowers to, and immediately set off to the third bank, Heritage Bay.

Meanwhile, Sweeney failed to drug his third teller victim, Melissa Murphy, before she set off an alarm, causing the bank to be sealed. Sweeney violently beat a security guard after he was denied exit, following his third robbery of the deposit boxes. Madsen, Hauser and Soto, along with several SFPD officials, arrived at the scene. Madsen formulates a plan to bust Sweeney out the bank, and enters the bank via air conditioning. She acts as a corrupt police officers who has "investment" in getting Sweeney out the bank. Sweeney takes the disguise of a police officer, wearing police uniform Madsen brought for him. They both leave the bank, tailed by Hauser and Soto.

Realising that they were being followed, Sweeney ordered Madsen to pull over and leave the car. However, Madsen sped up and crashed the right side of the police cruiser into another vehicle, rendering Sweeney unconscious, as he wasn't wearing a seatbelt. Madsen handcuffed him and retrieved a soft black bag with a key inside, similar to the one Jack Sylvane obtained from Barclay Flynn. After this, Sweeney was incarcerated in New Alcatraz.

Retrieved from "https://alcatraz.fandom.com/wiki/Cal_Sweeney?oldid=11013"
Community content is available under CC-BY-SA unless otherwise noted.