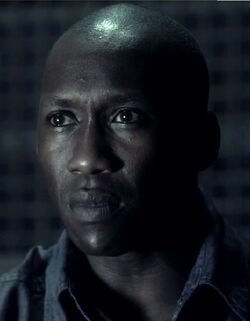 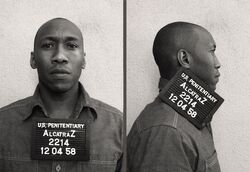 Montgomery was one of Lucy Banerjee's patients, and in their first session drew a connection between their situations as two of the few non-White people on the island. Montgomery endured unnecessary electroshock therapy in the Alcatraz infirmary.Then in the laundry room Clarence was taunted by E.B. Tiller which got him mad then William Gant talked to him he became so enraged, he slit his throat. He was questioned by Lucy Sengupta and Clarence told her you can't stop me now no one can.

After the "disappearance", a story was spread that Montgomery was transferred to Lompoc,then died there.

When Montgomery appears in 2012, he is put "on Hauser's radar" because he kills a white woman, Megan Palmer, outside a fundraiser. He has no knowledge of why he has done so, which causes him considerable distress.

After killing Megan, he hides out with Emmett Little, a fellow former inmate, and confesses both his recent crime and the procedures that were done to him in the infirmary. He later worked as a cook at a wedding and killed another girl. Later he was chased by Rebecca Madsen but got away. He was eventually killed by Emmett after begging him to end his life. His body was taken to Beauregard for an autopsy.

Retrieved from "https://alcatraz.fandom.com/wiki/Clarence_Montgomery?oldid=11094"
Community content is available under CC-BY-SA unless otherwise noted.