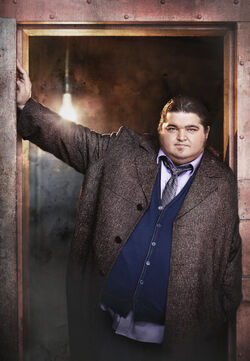 Soto first visited Alcatraz Prison when he was five years old and he hasn't stopped thinking about it since. In addition to being the world's foremost expert on the island, he has doctorates in both Criminal Justice and Civil War History. ("Pilot") He got the degrees to appease his parents, but he got blacklisted for publishing a major breakthrough in crime prevention theory for The National Journal of Criminology, as his urban statistical model's based on Gotham City (Batman). Thus, Soto ended up with a comic book store. At age eleven, Soto suffered a traumatic incident he does not yet want to discuss with Rebecca Madsen, nor with any one else he knows. However, Hauser does know about the event. In his last conversation with Dylan Callahan, Soto implies that this event in his life involved an adult who abducted or otherwise controlled him, but Soto escaped from him. ("Kit Nelson") It is later implied that he escaped with a car; while Hauser and Soto were chasing Cal Sweeney, Hauser remarks on Soto's poor driving skills, to which Soto replies that the last time he drove was when he was eleven. The two become silent after this statement.

Soto becomes part of HauserS Alcatraz team when Rebecca Madsen walks into his comic book shop, looking for information about Alcatraz inmate Jack Sylvane.Soto proves himself to be an invaluable asset, and joins Hauser's team to find and capture the 63's.He also helped hauser catch Ernest Cobb.As a civilian, Soto is the team member most likely to show any effect the cases have on him. The case which affects him most closely is that of Kit Nelson, a child murderer.Soto also helped the team catch Cal Sweeney Guy Hastings Paxton Petty And Johnny McKee.He was then captured by Pinky Ames and Herman Ames but he lived he also helped the team catch Sonny Burnett Clarence Montgomery Webb Porter and Garrett Stillman but stillman was killed.He also retrieved the third key from joe limericks corps and gave it to hauser.He was last seen staying at the hospital with Ray Archer to see if rebecca will live after Tommy Madsen stabbed her.

Retrieved from "https://alcatraz.fandom.com/wiki/Diego_Soto?oldid=10590"
Community content is available under CC-BY-SA unless otherwise noted.