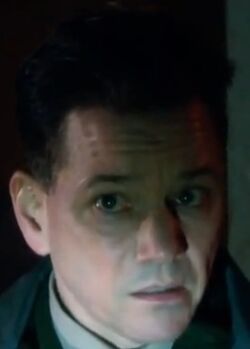 Officer Donovan worked at Alcatraz as a relatively senior guard. Upon the arrest and incarceration of Herman and Pinky Ames, he became their accomplice and provided them with a roughly drawn map of the Alcatraz dungeons, which the brothers used to find warden Edwin James' stash of civil war gold.

Donovan began by standing guard over Pinky Ames in the chapel, and closely following him when Ames asked for a toilet break. In the kitchens, Donovan gave Ames a map of the dungeons, when he showed him that he had managed to extract Warden James' keys from his coat while James visited the chapel.

Standing guard and watching the brothers attempt to make copies of the keys in the kitchens, Donovan gave them five minutes, after which it would be time for a shift change. The Ames brothers failed to produce the keys on time, and so Pinky deliberately injured another inmate using a kitchen drill, demanding him to claim that it was a simple kitchen injury. Despite having full awareness of what Ames had done, Donovan ordered the surprised guards to leave, and told Ray Archer to clear up the mess. Archer then found remains of the brothers' keys.

Donovan was later stationed at the chapel on a Sunday, where Edwin James was giving a homily. During James' speech, Herman Ames kept interrupting with drunk laughter. Eventually, after James inquired about whether Ames had a valuable contribution, Ames posed as a drunkard, after which Donovan handcuffed him and his brother Pinky. As the two were searched by Ray Archer, Donovan told him that he would take the brothers from there.

Archer became suspicious of the brothers and went directly to James to report his suspicions. James, followed by E.B. Tiller, went to the Solitary confinement cells as a result to talk to the brothers about Archer's concerns, only to find a beaten Donovan, who was locked up by the two brothers. Herman and Pinky Ames ultimately failed in their attempt to steal the gold, and Donovan was freed from solitary, and resumed normal service.

After his resurface into 2012 Donovan attempted too get the gold once again, but after the death of the Ames Brothers and finding the empty store room he was detaned by Hauser and interogated about the keys, its unknwon what information he gave away

Retrieved from "https://alcatraz.fandom.com/wiki/Donovan?oldid=10311"
Community content is available under CC-BY-SA unless otherwise noted.