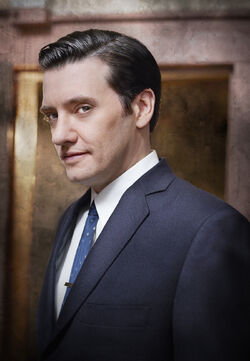 Deputy Warden Elijah Bailey "E.B." Tiller was the deputy to Warden Edwin James in Alcatraz in the 1960's.

Tiller escorted a newly arrived and fully nude Ernest Cobb to a meeting with Warden Edwin James, who was interested in Cobb's remarkable shooting skills. Following the end of the meeting, Tiller placed Cobb in his new cell, next to a loud inmate nicknamed "Yapper." ("Ernest Cobb")

Tiller took a personal joy in tormenting Jack Sylvane. On the visiting day, he planted a screwdriver in Sylvane's cell, denied him a visit by his wife, and relocated him to solitary confinement, also known as "the Hole." ("Pilot")

During Sylvane's time in "the Hole," Tiller pretended to release him, only to jokingly realize that it was another inmate's turn. Tiller encouraged Sylvane to eat his rotten food, since Alcatraz "can always get worse." ("Pilot")

Tiller had a somewhat contentious relationship with Warden James. During a yard fight between Sonny Burnett and Boyd Hicks, Tiller and James disagree on Burnett's transformation. James then tells Tiller, "The strength of the wolf is the pack, and the strength of the pack is the wolf. Just remember whose pack this is, E.B.". ("Sonny Burnett") Tiller and James find themselves at odds again when Tiller catches Garrett Stillman attempting to switch Harlan Simmons' parole ruling at the behest of the Warden. ("Garrett Stillman")

Tiller served as the Deputy Warden until 1962, when, at the age of 28, he left his position and joined the Federal Bureau of Investigation. Following his outstanding service as a member of the FBI, Tiller was awarded the Medal of Valor. ("Pilot")

Either during his tenure as the Alcatraz deputy warden or as a member of the FBI, Tiller befriended Emerson Hauser. ("Pilot")

Following his reappearance, Jack Sylvane came across a picture of Tiller in Diego Soto's book, which commemorated the ceremony in which he was given an award for valor. Enraged, Sylvane tracked down Tiller's residence, stabbed him to death, and damaged an old photograph of Tiller with Edwin James, leaving his fingerprint behind. ("Pilot")

Retrieved from "https://alcatraz.fandom.com/wiki/E.B._Tiller?oldid=10497"
Community content is available under CC-BY-SA unless otherwise noted.