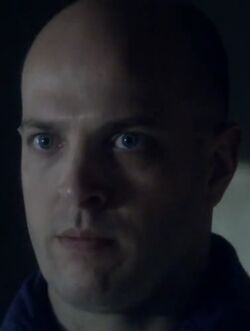 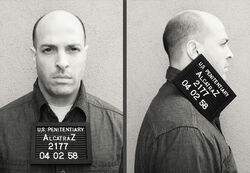 Prior to being sanctioned to Alcatraz, Edward, nicknamed "Pinky" and his brother Herman had been bank robbers. In the mess hall Pinky sits down at a table occupied by his brother Herman Ames and another inmate. After an argument with the inmate, Pinky forces him to leave the table before talking to his brother about a plot of theirs to steal gold from underneath the prison with the help of a corrupt prison guard named Donovan who had agreed to be their accomplice in their scheme as long as there was some gold in it for him. Then a guard named Ray Archer told them to line up for count, interrupting their discussion. In church Pinky discussed the difference between religion and spirituality with Father Gorden, Edwin James and E.B. Tiller and managed to swipe some keys from James that he believed would open up a door underneath the prison that would lead to the gold he and his brother were after. To make sure James wouldn't notice the keys were missing, Donavan later gave Edward some soap, which he and Herman used to clone the keys while working in the kitchen, although Edward was forced to maim one of the other inmates working there in order to distract the wardens as they began to grow suspicious of what Herman was doing. Edward then slipped James' keys back into his coat pocket before James could notice they had ever gone missing, planning to use the replica of the keys Herman had made to open the door underneath Alcatraz that would lead to the gold they were after.

In church Edward and Herman were sent to the hole for making a scene, and were escorted there by Donavan. When the wardens went to the hole to check on them, they found Donovan bound and beaten by the Ames brothers, who had managed to travel underneath the prison, to a door with the gold they were after lying behind it. Edwin James managed to catch up with them before they could get in, however, and had them both sent back to the hole.

Diego Soto sees Dandruff Guy doing "weird experiments" which seem to be having a disruptive effect on Alcatraz' electrical supply, as they appear to be causing occasional blackouts throughout the prison. After watching Dandruff Guy via CCTV footage, he decides to go down to the cells Dandruff Guy is standing outside of and confront him about what he is doing. After one blackout caused by Dandruff Guy disrupts the CCTV footage, Edward Ames sneaks up on Dandruff Guy and beats him to death with some metal shears. Diego arrives and sees Edward dragging Dandruff Guy's cadaver into a cell. As he turns to flee, however, Herman Ames turns up and knocks Soto unconscious. It would appear that the Ames Brothers upon their resurface in 2012 were attempting to get a second try to find the wardens gold stash. When Herman died after being shot in the neck by Rebecca, who was trying to rescue Soto, Pinky in grief stricken rage chased Rebecca and a wounded Hauser to the dungeons where they escaped. Later he made a recording saying that if Rebecca didn't give herself up he would kill Doc. Pinky tried to kill Rebecca Madsen again in a chase which lead to Broadway. Rebecca ran up the stairs a few floors above where Pinky was and threw a table over the railings which hit Pinky's head and killed him.

Retrieved from "https://alcatraz.fandom.com/wiki/Edward_Ames?oldid=11018"
Community content is available under CC-BY-SA unless otherwise noted.