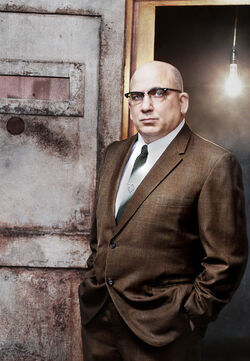 Warden Edwin James was chief warden in Alcatraz up to 1963. He first appeared in episode Ernest Cobb, being portrayed as an iron-fisted evil individual who rarely felt for his inmates, intimidating them to cause maximum annoyance.

According to Diego Soto, James died long before the events of 2012.

Warden Edwin James was chief warden of The Rock up to 1963, after which his fate is unknown. According to Diego Soto he died many years before the present day, but Hauser asks Officer Donovan about whether James is back, which may mean his death was also fabricated. ("Pilot")  ("The Ames Bros.")

He claimed to be father to at least one child. ("Kit Nelson")

James sought a private meeting with Cobb in the mess hall regarding Cobb's request to be situated in a private cell, in order to be alone. James mocked this and denied his request, and after hearing that Cobb had managed to land himself in solitary, he put a talkative inmate named Yapper in the same cell. The decision greatly angered Cobb, and led to his mental deterioration. James, in response, hired Dr. Lucille Sengupta to personally treat Cobb, being slightly remorseful of his actions. ("Ernest Cobb")

Being one of many enemies of inmate Kit Nelson, James immediately agreed for a visit to be made by Nelson's father, although he wasn't on Kit Nelson's certified list of visitor names. While Nelson was at the infirmary after being beaten by other inmates due to his status as a child killer, James arrived with a wheelchair, and told Nelson that he, infact told the inmates to attack him. Despite Nelson's objections, James told him that he would alter his list of visitor names, and let the visit go ahead.

Having heard that Mr. Nelson was unable to make Kit Nelson confess that he killed his brother Elliot, James ordered deputy warden E.B. Tiller to bring Nelson into a solitary cell, with James hiding inside. Alone in pitch darkness, James tells Nelson that he is a phillumenist, and produces some civil war matches. Telling Nelson that their conversation would last four matches, he tries to make Nelson confess to killing his brother, with the threat of making him spend the rest of his life in a solitary cell. Nelson finally confesses, and tells the warden on a bonus fifth match that the chrysanthemum flower he always left on his victims beds was his mothers and brothers favorite.

James sought to celebrate the birthday of E.B. Tiller in his own house, hiring the services of inmates Cal Sweeney and Harlan in order to act as stewards for the occasion. Sweeney attempted to use this as a way of confronting Tiller in order to reclaim his little tin box, his only possession which he thought Tiller took after he tossed his cell. Tiller managed to wound Sweeney with the pen given to him by the warden as a birthday present. James later incarcerated Sweeney and Harlan behind a mysterious door which required three keys to open.

Upon hearing that inmate Tommy Madsen had attacked a new guard, Ray Archer for seemingly no reason, Tiller notified James, who turned up at the infirmary. James teased Tiller, and told him that nothing was strange on Alcatraz, with the knowledge that they lived on an island inhabited by murderous thieves and rapists. He allowed Archer to continue his service to Alcatraz, though warned Guy Hastings that any escape attempt would be blamed on him.

James was part of the welcoming party which greeted inmate Paxton Petty after his conquest on the mainland. Intent on finding out where Petty had placed his last bomb, James instructed Milton Beauregard to torture Petty until he 'broke.' Seeing that the method was yielding no results, James turned to Sengupta, who electrocuted Petty, making him sing a Korean lullaby, which contained the location of the last bomb. James congratulated Sengupta, and ordered a sulky Beaureguard to do the same.

Pleased with Sengupta's success, James allowed her to question inmates to find memories which could be extracted in order to convert inmates into good men. Sengupta started with Johnny McKee. Although not yielding any results due to McKee's sexual banter, James threatened him with punishment for the murder of Michael Cullen if he did not cooperate during the second questioning.

James was complemented by Father Gordon, who saw him as a reason why inmates continued to attend Sunday services. When Tiller disagreed and claimed it was simply the opportunity to leave their cells for an extra hour, James asked Pinky Ames to clarify why he attended. Intrigued by Ames' reasoning, James allowed him to take his coat, from which Ames extracted James' three mysterious keys.

While giving a homily during Sunday services, Pinky and Herman Ames were sent to the hole for interrupting James. Concerned, Ray Archer spoke to James regarding the Ames brothers' purposeful incarceration attempt. Seeing no harm in asking, James opens a hatch inside a solitary cell, only to find a beaten Donovan, a guard, who was overpowered by the brothers.

With every guard on full alert, James, along with Tiller and Archer, entered the cellars under the 'D' Block, where James had a reason to think the brothers would head. They find the brothers in front of a large door, though not the one used to incarcerate Sweeney or Harlan. James attempted to soothe a curious Archer by simply saying the door was a way to escape.

Later, however, James arrived at the door on his own, and entered. Inside was huge amounts of civil war gold, totaling to around $73,440,000 in 2012 US dollars. Unable to contain himself over his apparent wealth, James remarked "hello ladies," and blowed on a gold bar in affection.

Retrieved from "https://alcatraz.fandom.com/wiki/Edwin_James?oldid=10366"
Community content is available under CC-BY-SA unless otherwise noted.