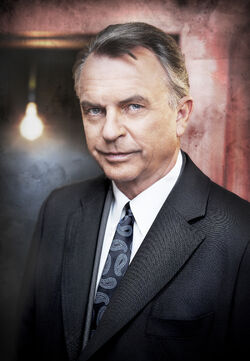 Emerson Hauser is the head of a government agency and a former police officer. He was one of the officers who discovered the disappearance of the 302 inmates and guards from Alcatraz on March 20, 1963.

He later joined the Federal Bureau of Investigation, becoming part of an Alcatraz Task Force as its leader with plans to build a second Alcatraz prison in California.

After the Alcatraz reappearance and prisoner Jack Sylvane's murder of E.B. Tiller, Emerson began working with Detective Rebecca Madsen and Alcatraz expert Diego Soto to discover the cause of the events.

During that time he also met Dr. Lucille Sengupta when he oversaw the transfer of Paxton Petty. Hauser and Sengupta worked on locating Petty's bombs through a Korean Lullaby. They also went to dinner together. ("Paxton Petty")

He was one of the two police officers who, while on a transfer visit to Alcatraz, discovered the empty prison following the disappearance of the 302 inmates and guards on March 20, 1963.

After the discovery of the missing prisoners and guards, Alcatraz closed the next day, March 21, 1963. The truth was covered up by the government and for the next 48 years, it remained undiscovered. ("Pilot")

After the disappearance, Hauser joined the United States government, anticipating the return of the guards and inmates. Over the years, Hauser rose to a leading position in the government, and became the head of the Alcatraz Task Force.

The task force soon began building an underground base under the prison, and recreating Alcatraz's facilities in an unknown forest. ("Pilot")

Jack Sylvane, an Alcatraz inmate reappeared. Not long after, E.B. Tiller was found dead. Detective Rebecca Madsen was investigating the crime scene when Emerson arrived and took over.

After Detective Madsen and an Alcatraz expert named Diego Soto started investigating, Emerson gassed them and took them both to his headquarters where he filled them in, showing them that Jack was the same age and explaining the truth about his disappearance. ("Pilot")

With the help of Detective Madsen and Soto, Jack Sylvane was found after kidnapping his brother and visiting his ex-wife's grave. Attempting to force Madsen to kill him, he was shot and wounded by an officer, but survived. He was taken into custody by Emerson and was imprisoned in the Second Alcatraz Prison in California. After entering, Emerson headbutted Jack, telling him that E.B. Tiller was his friend and had him put in his cell, telling him that he wouldn't be lonely for long.("Pilot")

When Lucy Banerjee was shot by Ernest Cobb Hauser shot his right hand and saying " No more shooting". He later killed Kit Nelson and brought him to Beauregard. Hauser helped catch Cal Sweeney and brought Guy Hastings to new Alcatraz. He later was held hostage by Paxton Petty who in turn shot his knee and worked very hard on the case for Lucy whom he still loves, and brought her to Beauregard to save her. He suggested reading to to her which Hauser did, after a talk with Jack Sylvane and the incarceration of Johnny McKee. He later was wounded by Edward Ames and got treatment after Donovan was incarcerated and the brothers killed. He then became angry when Sonny Burnett's blood did not match Lucy's. He also had a talk with a police chief after Clarence Montgomery was killed and gave the chief a file on the man who killed Ellen Casey. He also caught Webb Porter and gave blood to Lucy who woke up from her coma. He later found Garrett Stillman deceased in a trailer. At Alcatraz he used the two keys to open the door but he needed another key. He later retrieved the key and opened the door and found a map of the USA and inmate numbers were all over it and they found on the floor behind a console of some kind, Mr. K who asked what year it was. Hauser answered that it was 2012, Mr. K started to laugh.

Retrieved from "https://alcatraz.fandom.com/wiki/Emerson_Hauser?oldid=11065"
Community content is available under CC-BY-SA unless otherwise noted.