This article is about the inmate. For the episode, go to Ernest Cobb (episode) 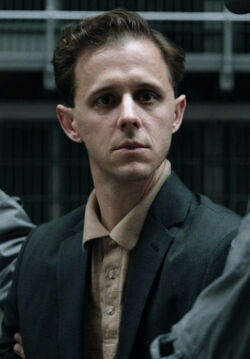 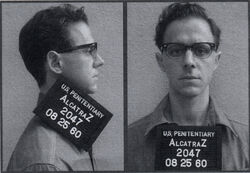 Ernest Cobb grew up in an orphanage from which he ran away at the age of 12. He found and visited his birth mother when he was 20, but was rejected by her. It was then that he caught a glimpse of a 16-year old Eloise Monroe – daughter of his birth mother – whom he was extremely jealous of.

Known as the “Wichita Sniper”, Ernest Cobb learned to shoot by killing crows for farmers. He has a specific preference for using Winchester Model 70 sniper rifle for his shootings where he would always shoot a few crows dead before picking off his victims by single kill shots to the heart. He would make three shootings in three days before going underground.

Cobb killed at least 19 people in 5 cities, including five 15 to 16-year old teenage girls whom due to his jealousy of Eloise, were the true targets – a fact he tried to hide with the randomness of his shootings. He was arrested after being identified from the FBI’s most-wanted list.

Ernest Cobb was transferred to Alcatraz in 1960 after purposefully shooting a guard in the leg so he could find himself a private cell. Instead, he was imprisoned next to Yapper whose non-stop chattering annoyed him. He requested to be put into a solitary cell, but the request was declined by Warden Edwin James. Cobb then decided he could break a simple rule that would send him into solitary confinement, but James threw Yapper in the same cell to torment him. To distract himself from Yapper’s babbling, Cobb made a scope out of magazine, magnifying glass and lenses, and spent his time staring at the city from his solitary cell.

Cobb’s repeated insubordinations to force his way into solitary finally drove Warden James to introduce Dr. Lucille Sengupta to help him.Later he listened to Webb Porter play his violin and was next to Kit Nelson because yapper was killed by Clarence Montgomery.

After arriving in modern-day San Francisco, Ernest Cobb bought a Winchester Model 70 from Whitten's gun shop and attempted three shootings with two successful attempts, one at a carnival, and another outside Columbus super store, killing 6 individuals including two teenage girls as per his modus operandi.

He was caught on security camera in the gun shop, where his hotel room key was also captured on footage allowing Detective Madsen, Diego Soto and Lucy Banerjee to locate him. Cobb however was ready for them; he assembled his sniper and was waiting for them in a room in the building directly opposite his hotel room. As soon as Banerjee opened the curtains to reveal the drawn target and words “I can see you” on the window, Cobb shot her in the heart, incapacitating her and sending her into a coma.

Cobb attempted his third shooting atop one of the two tallest buildings in San Francisco that he could see with his scope from his prison cell back in Alcatraz. The attempt was thwarted by Madsen and Hauser who apprehended him before he could kill anyone else. Hauser also shot Cobb in his right hand so that he could not shoot anyone again. Cobb was later sent to New Alcatraz, joining Jack Sylvane as inmate #2047.He watched as Hauser delivered the cadaver of Kit Nelson to Dr. Beauregard.He later listened to Webb Porter play his violin. He was questioned why he tried to kill Lucy and said as long as you're alive you will always be a target.
Retrieved from "https://alcatraz.fandom.com/wiki/Ernest_Cobb?oldid=10555"
Community content is available under CC-BY-SA unless otherwise noted.