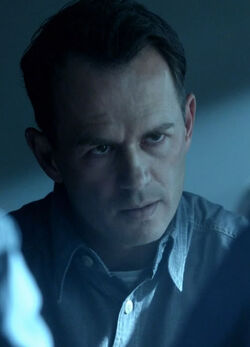 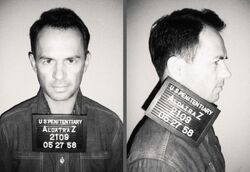 He was a military strategist for the British S.A.S. until he emigrated to the United States after the war. He started to rob armored trucks, because he "moved pieces around", he never harmed the guards. During his last job a crew member got mad at him and ratted him out. He was arrested and incarcerated in Alcatraz in 1958. (1960) In the recreation yard Stillman was playing chess with Warden Edwin James. James asked Stillman what his favorite piece was Stillman answered bishop. James invites him to attend a parole board hearing. Stillman asked what could I steal from a parole board hearing, but Warden James tells him it starts at 11 a.m. sharp. At the hearing Harlan Simmons was talking about reasons he should leave the rock. Tiller interrupted him and held him for stealing prison contraband so he can get fifty percent of his profits. After the hearing, Warden James gave Stillman a task to steal the parole board recommendation papers and replace them so Simmons can leave Alcatraz. In the mess hall Stillman got a group and offered them 10 percent. One got the recommendation the other copied it and gave Stillman a stewards uniform. The last one let Stillman into the Wardens house, shortly after he switched the recommendation, E.B. Tiller caught him. When Warden James heard he failed, he sent him to D block. It turned out Stillman set up Tiller to make the switch but still stayed in the hole. Simmons was later released from Alcatraz.

When he resurfaced in 2012. Stillman made up a contest with a guard and broke into his home and stole his uniform to steal 2 armored trucks. He later burned his accomplices in a fire and shot one. He then had to knock out a guard because he was denied. The two armored trucks were decoys. Stillman hot wired a car and left with a package that he was ordered to get by Tommy Madsen. Later in a trailer he opened the box to find a key like Jack Sylvane and Cal Sweeney stole. But Stillman later was killed by Joe Limerick and stole the key which later is recovered.

Retrieved from "https://alcatraz.fandom.com/wiki/Garrett_Stillman?oldid=11023"
Community content is available under CC-BY-SA unless otherwise noted.