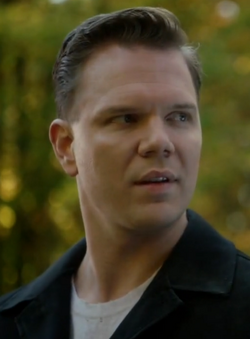 Guy Hastings is a former Alcatraz guard who resurfaces in modern-day San Francisco.

Guy Hastings was a senior guard in Alctraz during the 1960s. He lived in Block 64, with his wife and daughter, Annie, who was born in 1955. Despite the fact that they lived on Alcatraz, Hastings and his family were very happy. His duties included training new guards.

While Archer was being treated in the infirmary, Hastings discussed the issue with Warden James, E.B. Tiller and Dr. Beauregard. E.B. Tiller notified James after being informed about Madsen's behavior, which he claimed was "strange," and that Madsen knew Archer, claiming that Archers' continued employment could lead to a breakout. James however, decided to let Archer remain as a guard, as Hastings thought that Archer was brave enough to not resign after the fight.

Throughout Archer's service, Hastings tested him in many different ways in order to unearth the secret between Madsen and Archer. He first asked him whether he knew Madsen by appealing to him, saying that he will be putting himself in great danger to save Archer.

When Archer replied saying he did not know Madsen, Hastings decided to find out by other means, such as supposedly testing Archer on the cell door controls, which resulted in another fight between Madsen and Archer, with Archer nearly killing Madsen before Hastings finally intervened.

Hastings witnessed Archer visiting Madsen in the infirmary, where it was confirmed that the two were brothers, and that Archer changed his surname from Madsen, to be accepted as a guard at Alcatraz. Archer's true reason as to why he joined Alcatraz was to keep Tommy Madsen company. It was said that he died in 1960 due to a chemical spill.

Guy Hastings reappeared in his old home at Alcatraz, in Block 64 in 2012. After retrieving pictures of his old family and a gun from his secret hiding place inside the decaying panel, he brutally beat a ranger and departed on the 9:00 AM boat off the rock.

Not knowing where to begin, Rebecca Madsen and Diego Soto spoke to Hastings' daughter, Annie, who claimed that she and her mother were sent off the rock because of the apparent "accident." Due to this "accident," which was a chemical spillage hoax, Hastings was reported dead with eight other guards. In order to figure out why Hastings is doing this, they asked her if she possess any materials previously owned by her father. Madsen and Soto retrieved the box of Hastings possession, promising Annie that she will receive the box back after they did their investigation. It was told that they were given to Annie after her fathers death.

Receiving a call that her uncle disappeared, Rebecca Madsen and Emerson Hauser went to Ray's apartment. At the time of their arrival, his items had already been scattered by Hastings. They found the area in complete mess. They soon discovered a broken picture of Tommy and Ray when they were young, which Rebecca concludes that Hastings was actually using her uncle to get to Tommy.

Meanwhile, Hastings was taken by Ray to a graveyard, where Van Madsen was buried. Noticing that the gravestone said "Beloved husband and father," Hastings realized that Rebecca was actually the daughter of Van Madsen, which Ray Archer took custody of Rebecca after her parents died. Not wanting Rebecca to be harmed, Ray told Hastings that he would take him to Tommy.

Ray led Hastings to Hayworth, China Basin, near the San Mateo Bridge, where he claimed Tommy and him grew up when they were young. Unable to find Tommy in the building, Hastings decided to wait, but as soon as he saw Rebecca Madsen and Diego Soto entering the house, he ambushes Rebecca, but is then shot by Hauser in the leg, who followed close behind.

Demanding proof that his daughter, Annie, was alive, Hastings asked Hauser to take him to her. Hauser obliged, but told Hastings that he could not speak to her or be seen by her. He was then brought to New Alcatraz.

Retrieved from "https://alcatraz.fandom.com/wiki/Guy_Hastings?oldid=11014"
Community content is available under CC-BY-SA unless otherwise noted.