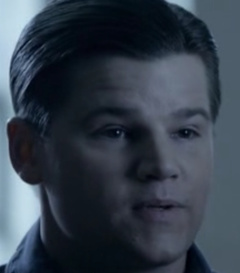 Harlan Simmons was born in 1934 and put into Alcatraz in 1959. Harlan Simmons is the inmate who has the cell next to Cal Sweeney. During their time at Alcatraz Sweeney takes Harlan as his protégé. Harlan later betrayed Sweeney and was shown by Warden Edwin James to a secret underground chamber beneath Alcatraz. Harlan Simmons is granted a fraudulent parole in 1960 due to Garrett Stillman fixing the recommendation. He leaves Alcatraz, departing with a personal farewell from the Warden. Simmons later becomes a billionaire executive in charge of the company Broadway Mutual. At some unknown time, Simmons comes into possession of the skeleton key which was formerly in the Warden's control in the 1960's and used to open the underground chamber beneath the lighthouse on Alcatraz. It was also said that he hired Will Peters to keep a eye on Rebecca Madsen and threatened to kill Joe Limerick if he didn't retrieve the key from Garrett Stillman it is possible he gave the key to Barclay Flynn and to the bank.

Retrieved from "https://alcatraz.fandom.com/wiki/Harlan_Simmons?oldid=10274"
Community content is available under CC-BY-SA unless otherwise noted.