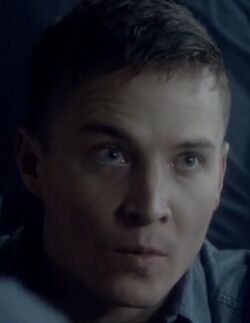 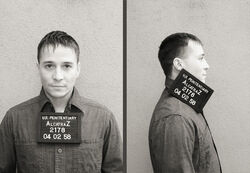 He and his brother Pinky Ames were bank robbers, who were eventually caught and sent to Alcatraz. There they heard a rumor that there was gold buried underneath the prison and hatched a plan to steal it and escape from Alcatraz. In the mess hall he and Pinky had an argument with an inmate, forced him to leave the table they were eating at, and then discussed their elaborate plan, revealing that they had successfully goaded a corrupt guard named Donovan into helping them out with promises of sharing the gold with him. After convincing the wardens to let the two of them work in the kitchen, Pinky was able to swipe the keys to the door underneath the prison standing between them and the gold from Edwin James, and to make sure James wouldn't notice they were missing, quickly went down to the kitchen to use some soap Donovan had given him to clone the keys. Herman successfully did this, although when James became suspicious about what Herman was doing, Pinky was forced to maim one of the other inmates working in the kitchen in order to distract James. Pinky then slipped James' keys back into his coat before James could notice they were missing, planning to use the replicas Herman had made to open up the door underneath Alcatraz that would lead to the gold he and his brother were after.

Later the Ames brothers deliberately provoked James into sending them to the hole, and Donovan convinced James to let him escort them on his own. When James later went to the hole in order to check on the Ames brothers, he found Donovan bound and beaten there. By now, the Ames brothers were already underneath the prison looking for the door that they could now open with their replicas of James' keys, but James and his guards caught up with them before they could open it. James then had them both sent back to the hole, and later that same day, opened up the door himself so he could privately gloat about his wealth.

After their resurface in 2012, Herman and Pinky attempted once again to steal Alcatraz's gold. Breaking into the now mostly abandoned Alcatraz, they eventually stumbled across Diego, who recognized them both, spurring Herman to kidnap him so they could interrogate him over how he knew who they were. Herman was later shot in the neck by Rebecca, who was trying to rescue Diego. He died in his brother's arms.

Retrieved from "https://alcatraz.fandom.com/wiki/Herman_Ames?oldid=11017"
Community content is available under CC-BY-SA unless otherwise noted.