Inmates of Alcatraz is a fictional book written by Dr. Diego Soto, first advertised in TV Guide, and was later referenced in "Pilot".

As described in the TV Guide advertisement blurb:

The cover of the book presents a black-and-white picture of Alcatraz, with several mugshots of Alcatraz inmates, including those of David Dowling and Stuart Nicholls.

The back cover of the book sheds light on Soto's past experience with Alcatraz, and on his post-graduate education:

As part of the viral marketing for Alcatraz, a book review of Inmates of Alcatraz was sent to a number of media channels. As published on page 34 of the fictional magazine Commerce Quantified, fictional literary critic Nancy Gleinen reviews Soto's latest publication. 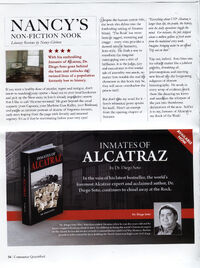 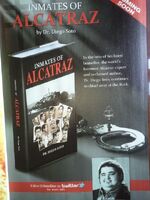 An ad for the book was published in an issue of TV Guide, with a "Coming Soon" label, and a link to Diego Soto's Twitter page. A portrait of Soto was also included.

In addition, Fox released a commercial, announcing the release date of the book to be January 16, 2012. 300px|left

Retrieved from "https://alcatraz.fandom.com/wiki/Inmates_of_Alcatraz_(book)?oldid=5849"
Community content is available under CC-BY-SA unless otherwise noted.