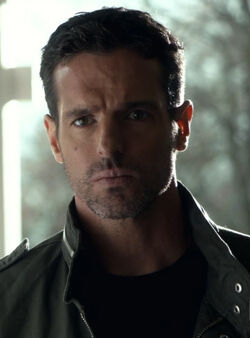 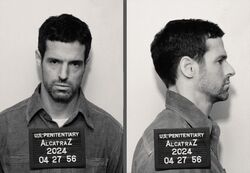 Following his military service in World War II, Sylvane was arrested after robbing a grocery store to feed his family. He was sent to Leavenworth, a federal prison, because the store also sold postage stamps, which made it legally a post office. While in jail, a fellow prisoner sexually advanced on Sylvane, who in turn murdered him. Sylvane was sentenced for the murder on Feb 16, 1956 and was officially incarcerated at Alcatraz Prison April 27, 1956 . ("Pilot")

On a visiting day in Alcatraz, Deputy Warden E.B. Tiller planted a screwdriver in Sylvane’s cell and sent him into solitary, depriving him of the chance to meet with his wife, Sonya. On the day of his supposed release, he demanded to know what his wife was told regarding his absence, but was taunted by Tiller who claimed to have made a mistake about his release, delaying it further. ("Pilot")

After spending a month in solitary confinement, Sylvane was released to the infirmary, where Dr. Beauregard drew a great amount of blood from him. It was there that he met another inmate, #2002 who dropped cryptic hints about a terrible place “below the hole” and warned that “something terrible’s gonna happen here”. ("Pilot")

Despite being unable to see her, Jack spent most of his time in Alcatraz staring at his picture of Sonya. The inmate in the neighbouring cell, Johnny McKee, made fun of his trait. Sylvane and McKee spent time discussing the works of Jules Verne along with other authors which McKee was a fan of. ("Johnny McKee")

When Sylvane finally got to meet Sonya, she asked him for a divorce, throwing him into a fit of rage. Sonya later remarried Jack’s brother, Alan Sylvane. He was then sent to Solitary for his actions. He was later seen as he listened to Webb Porter play his violin.

Sylvane was thought to have died in 1976, after being transfered to San Quentin when Alcatraz closed in 1963. However, his transfer and death were both fabricated to cover up the 1963 incident in Alcatraz. ("Pilot")

Sylvane arrived in modern-day Alcatraz, and was found “sleeping” in a cell by a curious young girl on a tour. He was perturbed and confused by the new environment, and was surprised to find a ferry ticket, some money and a locker key labelled “8” in his jacket pocket. While aboard the ferry back to mainland, he stole and flipped through Diego Soto’s book, “Inmates of Alcatraz” and was furious to find out that Tiller was still alive and had been awarded the Medal of Valor. Sylvane set out to take revenge on him.

Sylvane killed the now 78-year old Tiller out of rage by stabbing him in the chest. He accidentally left a print on a photo at the scene of the crime which allowed Detective Madsen to identify him, but access to his file was restricted to her.

After committing the murder, Sylvane headed for a locker room to retrieve a handgun and a change of clothing from a locker, with the key that was in his jacket. He attacked an attendant who spotted him with the gun, then took off in a cab to Barclay Flynn’s residence to carry out a mission instructed by an unknown group of people. The Alcatraz Task Force was notified of the attack because Sylvane had left his Alcatraz inmate uniform in the locker room.

The attendant provided the task force with the license plate number that Sylvane took off in and Madsen ran it through SFPD. Two officers arrived at Flynn’s residence to apprehend Sylvane. Sylvane however, shot the officers, killing one and severely injuring the other. He demanded Flynn, at gunpoint, to hand over the soft black bag containing an old key, then shot and killed Flynn after acquiring the item.

Sylvane had something else personal to do; he went looking for his brother, Alan Sylvane at his house to confront him about Sonya’s remarriage but was greeted by his son, Alan Sylvane Jr., whom Sylvane thinks has eyes that resemble Sonya’s. Sylvane found out that Sonya died of cancer in 2008. Stricken by grief and betrayal, Sylvane advanced towards Alan with his gun. He gagged and tied his son up and had Alan take him to visit Sonya’s grave. At her grave, Sylvane expressed his love and forgiveness for her, “It’s ok, Sonya, what you did. In my heart, there’s only love for you.”

Detective Madsen arrived at the graveyard and questioned Sylvane. He admitted to hurting people, killing Tiller out of hatred and claimed to have killed Flynn because of what “they” told him, but did not reveal who “they” are, nor what happened to him. He asked Madsen to shoot him, and when she didn’t, he pointed his gun at her, forcing Hauser’s snipers to shoot him. Sylvane was apprehended and locked up in New Alcatraz.

Hauser brought Sylvane to New Alcatraz for lockup and Sylvane claimed to know him. Sylvane, inmate #2024 was now the first to be put into this Second Alcatraz Prison but was told he would be joined by others soon.

When Ernest Cobb resurfaced in 2012, Sylvane was interrogated by Lucy Banerjee in New Alcatraz about his knowledge of Cobb, as well as what happened during his disappearance and what the old key that he took from Barclay Flynn was for. However, he did not have the answers to any of these questions as was confirmed by the lie detector. When Lucy was shot by Cobb, Sylvane was questioned by Hauser who attempted to find out if she was a target, but Sylvane did not know and thus was threatened to have his memory jogged by Dr. Beauregard. ("Ernest Cobb")

When Cobb was finally arrested and arrived in New Alcatraz, Sylvane shared a look with and seemed to have recognized him. ("Ernest Cobb") He later also witnessed Hauser carrying Kit Nelson's dead body into the prison. ("Kit Nelson")

Slyvane was briefly brought from prison to be questioned by Rebecca Madsen regarding Johnny McKee. Sylvane told her about McKee in return for his picture of Sonya. According to Sylvane, his neighbour McKee was an "oddball," who could not stop talking about Jules Verne or other authors. ("Johnny McKee")

Back in New Alcatraz, Sylvane gave his picture of Sonya back to Emerson Hauser, claiming that looking at dead people dreaming about the life he was never going to have was useless. Despite Hauser assuring Sylvane that nothing had changed in his life apart from the mysterious passing of 50 years, Sylvane told him he doesn't dream anymore. Since then, Sylvane seems to be in an apparent depression. He was last seen in his cell listening to Webb porter play his violin and in the Garrett Stillman episode for a brief moment.

Retrieved from "https://alcatraz.fandom.com/wiki/Jack_Sylvane?oldid=11011"
Community content is available under CC-BY-SA unless otherwise noted.