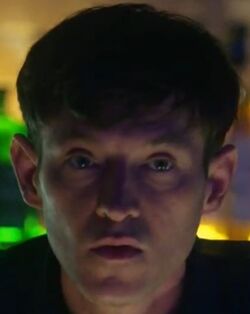 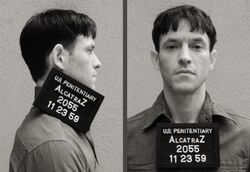 John "Johnny" McKee is a supposedly deceased, former Alcatraz inmate who resurfaces in modern-day San Francisco. He is said to be a vicious murderer with a gift for chemistry and a penchant for the works of Jules Verne.

Johnny McKee grew up in Oregon, and was described as smart, yet shy, dorky and friendless. During his high school years, he was viciously bullied by the school football team, possibly for being a "chemistry geek." He had a date with Virginia Winters, who McKee described as the prettiest girl in class. Winters, however, was part of a prank posed by the football team, and McKee was severely injured in his privates after Winters lured him naked to a dark room in a gym, where the football team ambushed him. Afterwards, McKee burnt Winters' face with acid as revenge.

McKee taught Organic Chemistry at junior college and, in his spare time, he poisoned people. His drug of choice was Cyanide, although he did have extensive knowledge of other poisonous products such as Nightshade and Phosgene. Although he began by poisoning only a few people at once, he escalated into killing 42 people in his former high school class at their 15th year reunion in 1959, where he posed as a janitor and rigged the sprinklers with Zyklon A (a Cyanide-based pesticide). He pleaded not guilty in court, however, he still ended up in Alcatraz.

McKee spent most of his time in Alcatraz reading books from the library. One of his favorite authors included Jules Verne, and he continually told his cell neighbour, Jack Sylvane about Verne's works. He also kept a jar full of bugs in his cell, which he poisoned using white margin nightshade he found on the island while on gardening duty. According to Sylvane, it was called his "killing jar."

In 1960, McKee was summoned by Michael Cullen, a feared and iron-fisted inmate. Cullen informs McKee that he runs Alcatraz' trade in makeshift knives, but is facing competition from inmate Grindle, the prison librarian. He wants McKee to kill Grindle - though he could have one of his men do it with one of his knives, he would prefer that McKee use poison to make the death remain more or less anonymous. He also notes that although he would prefer anonymity, he has no problem with simply knifing Grindle, and McKee as well. McKee thus accepts.

McKee approached Grindle in the library, telling him he wanted something "short, sharp, and to the point." Gringle then gave him a plastic knife in return for a Desires magazine. Afterwards, McKee casually asked Grindle whether he was going to movie night. Despite Grindle preferring to read, he agreed to go when McKee mentioned that the film, Born Reckless, was a western starring Mamie Van Doren. McKee then began preparing the poison using the plastic knife.

During a questioning in the infirmary, Dr. Sengupta and Edwin James attempted to interrogate McKee to find memories which resulted in McKee searching for revenge. Although the interrogation was to last an hour, James got angry with McKee's sexual banter in response to Sengupta's questions; and sent him back to his cell.

During movie night, McKee saved Grindle a seat right in front of him. Cullen sat next to McKee, telling him to get on with the poisoning. McKee however, apparently wished to wait for Van Doren's grand finale before poisoning Grindle. As the movie ended and the prisoners got up to return to their cells, however, one of the guards realised that Cullen had been killed. As all the prisoners stopped for count, Grindle asked McKee about Cullen's death, to which McKee responded "nobody likes a bully."

Sengupta and James retried questioning McKee, using Cullen's death as an excuse to punish him if he did not cooperate this time. McKee was forced to tell them about the date with Virginia Winters, although even with James' warning, he adamantly refused to tell them about why her face was burnt. Sengupta correctly guessed about how McKee was involved in a prank, and told McKee that she could now help him.

After coming back, Johnny McKee got work as a bartender at a club. However, when a group of people annoyed him, he mixed poisonous nightshade into their drinks. He then got a job as a pool person, but mixed toxic chemicals into the pool water when one of the swimmers irritated him. He then took control of a subway, and flooded the train with the chemical COCl2 that caused the victims to suffocate. Luckily, Madsen and Hauser arrived just in time to evacuate the victims. McKee ran through the tunnels trying to escape, but Madsen caught up with him and pushed him onto the third rail, where McKee was electrocuted. He survived however, and was brought to new Alcatraz.

Retrieved from "https://alcatraz.fandom.com/wiki/Johnny_McKee?oldid=10935"
Community content is available under CC-BY-SA unless otherwise noted.