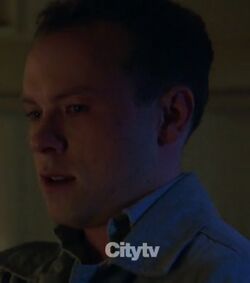 Limerick made a nearly successful escape attempt from Alcatraz in 1960, having made it all the way to the waters of San Francisco Bay. After being caught and re-incarcerated, he explains to Tommy Madsen, who sits in the adjacent cell, that he was unable to overpower the currents of the bay. It is then revealed that Warden James had fabricated Limerick's death certificate and has stripped him of his inmate number. Upon telling this to Limerick, Madsen utters, "I guess that makes you some kind of ghost".

Joe Limerick is first seen in 2012 confronting Garrett Stillman immediately after Stillman had stolen the skeleton key from Harlan Simmons' company Broadway Mutual. Limerick requests Stillman to give him the key and when Stillman refuses, Limerick shoots him and takes the key.

Soon after, Joe arrives at a psychiatric hospital and requests to be admitted. During his plea for admission, he explains that there are some "bad people" after him and that he needs to lay low for a while. Once he explains that he was an inmate of Alcatraz Prison, he is granted his request. Limerick's isolated protection lasts for a short time as Tommy Madsen is able to gain access to the psychiatric center. Madsen demands the skeleton key from Limerick, offering protection from Harlan Simmons in return, which Limerick asserts is "impossible". Joe then throws himself out of a third story window, killing himself upon hitting the sidewalk. It is then discovered by Diego Soto that Limerick had sewn the skeleton key into his pant cuff. Soto retrieves the key and later gives it to Emerson Hauser .

Retrieved from "https://alcatraz.fandom.com/wiki/Joseph_Limerick?oldid=11025"
Community content is available under CC-BY-SA unless otherwise noted.