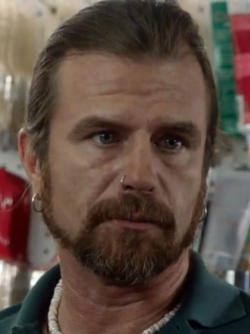 Keller was the owner of Keller's Hardware store in Walnut Creek, San Francisco, CA. His store was robbed by Kit Nelson, who took two children's fishing rods and a uniform belonging to a store employee named Warren. Due to the nature of the items stolen, Keller thought the robbers were children, so he did not report it to the police.

Rebecca Madsen and Diego Soto investigated the store and questioned Keller after Nelson broke into the Callahan household to kidnap Dylan Callahan. His mother, Kathy Callahan told Madsen she recognised Nelson as Warren from Keller's Hardware. In reality, Nelson used the stolen uniform as a disguise, and introduced himself to Kathy as Warren, looking for work in order to steal the house keys and kidnap Dylan later.

Keller told Madsen and Soto that the only place people go to fish in the area was Lafayette Recreation Area, where they believed Nelson may put the stolen fishing rods to some use.

Retrieved from "https://alcatraz.fandom.com/wiki/Keller?oldid=7191"
Community content is available under CC-BY-SA unless otherwise noted.