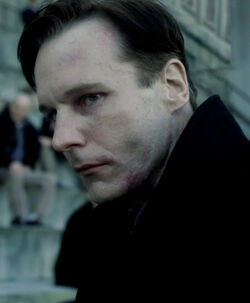 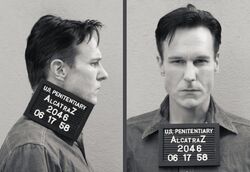 Kit Nelson was born to an unnamed mother and Mr. Nelson before the second world war. During the war, while his father was off fighting, and his mother at her father's funeral, Nelson and his 11-year old brother Elliot, were left alone. During their time in a bomb shelter, Nelson strangled Elliot, and left a chrysanthemum on his mother's bed, as it was her favorite flower. Nelson told his mother that his brother had died of scarlet fever. Though his mother knew the truth from the start, she was not prepared to lose two children in one day, and buried the body before any autopsy could be performed.

During his later life, Nelson worked at a company named C&C, which used to make bomb shelters before and during the war. Due to his job, Nelson knew the locations of abandoned bomb shelters in the United States.

Nelson kidnapped and killed three 11-year old boys in 1958. He used his knowledge of bomb shelter locations to hide his victims and strangle them. He kidnapped his victims on a Friday leaving a chrysanthemum on their bed, making them go fishing, play miniature golf, eat cherry pie, and go to the cinema. These four main hobbies were his brother Elliot's favorite things to do. He would strangle his victims inside a bomb shelter, apparently enjoying the feeling, and return them dead back to their houses on a Sunday. He was caught in 1958.

For kidnapping and murder, Nelson was incarcerated for life In Alcatraz. He was viciously beaten by the other inmates due to the criminal hierarchy, with child killers being the lowest. At some point, his father came to visit him, despite him not being on Nelson's list of names.

Nelson was one of the most hated prisoners, by his father, the other inmates, the wardens, and even Dr. Beauregard, who all kept mocking him with references to their own children. When he was beaten in the recreation yard he went to Beauregard and when Beauregard left, an inmate warned him about Beauregard and told him that child killers are the lowest at Alcatraz. That inmate was Tommy Madsen. At some point Warden James ordered Nelson into Solitary, a pitch black solitary cell, in order to question him about his brother's murder. Under threat of permanently being incarcerated in a pitch black cell, Nelson admitted that he killed his brother, something even his father could not get him to do. He listened to Webb Porter play his violin and his cell is next to Ernest Cobb.

On a Friday, Nelson kidnapped Dylan Callahan, and left a Chrysanthemum on his bed. He made Dylan go fishing, almost drowning him. Dylan was also forced to go to the cinema and cafe, before finally being hidden in a bomb shelter near Walnut Creek, CA, the Callahan's area of residence. After chasing Dylan, who attempted to escape, he was held at gunpoint by Rebecca Madsen, although he was shot in the head by Emerson Hauser. He died immediately.

Nelson's body was taken to the Second Alcatraz Prison, for an autopsy, to be conducted by Dr. Beauregard. He was the first ever '63 to arrive at the prison dead. Beauregard, after remembering Nelson back in 1960, played "I'm in my wine" by Amos Milburn to celebrate his death.

Retrieved from "https://alcatraz.fandom.com/wiki/Kit_Nelson?oldid=11012"
Community content is available under CC-BY-SA unless otherwise noted.