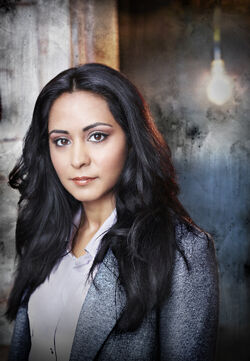 In 1960, Lucy was brought to Alcatraz by warden Edwin James, to treat inmate Ernest Cobb who proved to be mentally incapable of living with others. She was introduced as Dr. Lucille Sengupta, and appeared

to be the same age, if not younger, as in 2012.Lucille Sengupta was invited to the Warden's residence in 1960 to celebrate E.B. Tiller's birthday, where she revealed to Tiller and Dr. Beauregard that she hoped to 're-wire' the Alcatraz prisoners by isolating the traumatic memories that prompted their antisocial behavior and then remove them.Lucille Sengupta met SFPD officer Emerson Hauser arriving with inmate Paxton Petty. Sengupta then offered Hauser some mints to help with his sea sickness. After Dr. Beauregard's and Warden James' techniques failed, Lucy drugged Petty's tea to help him relax and recall his military service in Korea. She also administered electro-convulsive therapy on him. After Petty started to sing a Korean lullaby, Lucy then questioned inmate Thomas Madsen about it in exchange for knowing why he was in the infirmary a lot. Lucy worked on figuring out the keywords in each line of the lullaby, but also needed help from Hauser in finding the solution. At the same time she also asked him out to dinner.She also helped Johnny McKee and got a little mad at his negativity.She also helped Clarence Montgomery and found something in commune with him by not being white and she questioned him about the death of William Gant and complimented his cooking.She also was hired to do the toughest job ever harder than Ernest Cobb Paxton petty and Johnny McKee it was Webb Porter she helped him and Beauregard told her your the wardens new toy.

Not having aged a day, Lucy serves as Emerson Hauser's lab technician and partner in his investigations as part of the Alcatraz Task Force. She was present when Rebecca Madsen and Diego Soto were first brought to the Underground Alcatraz Base, and along with Hauser, explained Jack Sylvane's reappearance.The reappearance of Ernest Cobb had Lucy serving as a "babysitter" to Rebecca and Doc. She joined them on their investigation of Ernest Cobb's hotel room, though unknown to her and her colleagues, Cobb was staying across the street, and marked a bullseye and the words "I CAN SEE YOU" in the room's window. Once she opened the drapes, Cobb shot Lucy in the chest, though failed to kill her.Lucy's condition only slightly improved, with the gunshot wound sending her into a coma.She later was moved to new Alcatraz by Emerson hauser and treated by Buauregard.After getting blood from Webb Porter, she wakes up.And then helps the team catch Garrett Stillman and helped hauser find the secret room.