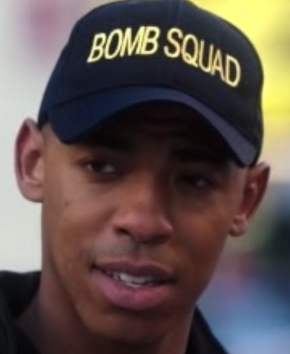 His sense of humour and jokes earned him the nickname "Psycho." His friendly personality was valued by his colleagues.

Tanner died at Sunset Beach after attempting to dismantle a landmine planted by Paxton Petty, on which Emerson Hauser had been stepping on for hours. Despite his courage and apparent success, the trigger of the landmine exploded in his hand after he dismantled it, inserting shrapnel into his brain. His death resulted in Rebecca bursting into tears, and even Hauser showing some grief. His friends and colleagues desperately tried to save him.

Retrieved from "https://alcatraz.fandom.com/wiki/Matt_Tanner?oldid=10585"
Community content is available under CC-BY-SA unless otherwise noted.