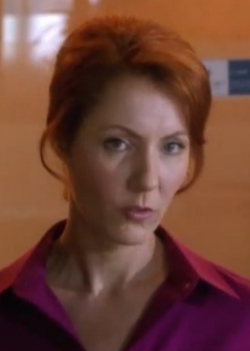 Full Name
Melissa Murphy
Portrayed by
Laura Jaye
First Appearance
"Cal Sweeney"
Last Appearance
"Cal Sweeney"
Age
50s
Occupation
Bank teller
Residence
San Francisco, CA
Affiliation
Heritage Bay National Bank
Melissa Murphy was a bank teller at the Heritage Bay National Bank. She was used by Cal Sweeney to easily access the safety deposit boxes. While Sweeney was supposedly "flirting" with her at the safety deposit vault, he attempted to drug her, but failed to do so before Murphy set off the alarm.

After Rebecca Madsen and Diego Soto realised that Murphy was Sweeney's next victim, they took the bank under siege with the help of the SFPD and SWAT. Sweeney was then cornered and held the entire bank hostage.

Retrieved from "https://alcatraz.fandom.com/wiki/Melissa_Murphy?oldid=7442"
Community content is available under CC-BY-SA unless otherwise noted.