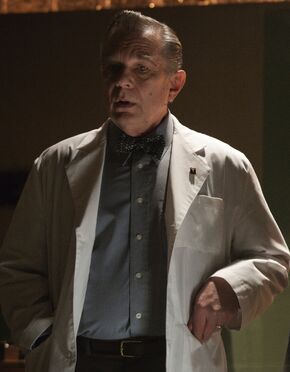 Dr. Milton Beauregard was the chief doctor on Alcatraz, and currently serves as a doctor at the New Alcatraz.

Dr. Beaureguard was a doctor working at the infirmary in Alcatraz Prison since at least 1960, and greatly disliked the prisoners he looked after. Somehow, Tommy Madsen managed to offend him, and was subsequently forced to donate huge amounts of blood. ("Pilot")  ("Kit Nelson")

Jack Sylvane was taken to Beauregard after serving Solitary confinement. Beauregard mocked Sylvane's curiosity about why he was taking so much blood from him, and told Jack to keep his "opinions to [his] god-forsaken self." ("Pilot")

Ernest Cobb was hospitalised in the infirmary, due to his incapability to live with other inmates. This time, however, Warden Edwin James invited another doctor to help Cobb, claiming his was a "special case." The invitation prompted the arrival of Lucille Sengupta, who Beauregard met later on. ("Ernest Cobb")

Just like the inmates, Beauregard particularly hated Kit Nelson, a child killer who was incarcerated for killing four children, including his brother. When Nelson was beaten by the other inmates in the Recreation yard in 1960, Beauregard refused to treat him to the best of his ability, due to the fact that he also had children, an 8 and a 10 year-old. ("Kit Nelson")

Beauregard and his wife attended E.B. Tiller's birthday party, during which he met Lucille Sengupta, and claimed that her profession, lobotomising lab animals, sounded like magic. He jokingly commented on how he and Sengupta were both similar in profession, as they both worked with "rats" (inmates). ("Cal Sweeney")

Beauregard was also present when Ray Archer, a trainee guard, arrived at the infirmary after being beaten by his brother, Tommy Madsen. He commented that he did not bother using anesthetic to stop the pain during treatment, and therefore he forgot in Archer's case.("Guy Hastings")

Beauregard was a member of the welcoming party which greeted Paxton Petty as he was brought to Alcatraz. As a matter of torture, Beauregard had Petty dunked numerous times in a bathtub full of icy water, which Beauregard claimed had never failed him before. When Petty refused to tell him the locations of the remaining bombs, Dr. Sengupta exasperatedly told him that there was no chance that Petty would give in.

When Edwin James told Beaureguard to step aside for Sengupta's "talking cure," he grudgingly retreated and mocked Sengupta's seemingly useless way of extracting information from Petty, which included relaxation and electrocution. After realising Sengupta had succeeded with breaking Petty's "code," he was forced to compliment Sengupta by James. Angry, he refused to tell her why Tommy Madsen was always giving blood in the infirmary.

After Beauregard witnessed Sengupta's success, he tried the same electrocution experiment on Clarence Montgomery, but with a few major differences. While Sengupta had tried to make Petty comfortable by drugging his tea and talking soothingly, Beauregard preferred to inject Montgomery with anesthetic rather then with drugs. While he prepared Montgomery, Beauregard commented that "it works in one direction, I don't see why it won't in the reverse," which subtly meant that Beauregard wanted to plant a false memory in Montgomery's head, so he would think he was a killer, even though he was innocent. Later, Beauregard asked Edwin James about what was happening with his patients' blood, between the time when he extracted it and then put it back in. James told him that he was not doing anything with it.He later witnessed Lucy sengupta work on Webb Porter and had a good result to it.Buauregard told her the wardens got a new toy who was Lucy sengupta.

After shooting Kit Nelson, Emerson Hauser brought his body to New Alcatraz for autopsy. Surprisingly, Beauregard had been hired for the job, and he seemed to have aged, unlike the prisoners - though this is arguable. It's possible that Beauregard reappeared a few years earlier. After seeing Nelson's body and recognising him, Beauregard played the record "I'm In My Wine" by Amos Milburn in celebration. Hauser was later seen giving {Lucy} to Beauregard and asking him to fix her who then tried every method he knew, including electroshock but they all failed. Beauregard then suggested that Hauser read to her, which Hauser did not do until after he had a talk with Sylvane. He and Hauser also questioned Donovan about the keys. He later helped hauser with his gun shot wound and they talked about how the 63s were in perfect health like Cobb, from which they deduced that blood from a 63 could save Lucy. They eventually managed to secure a compatible blood source and saved Lucy.

Retrieved from "https://alcatraz.fandom.com/wiki/Milton_Beauregard?oldid=10943"
Community content is available under CC-BY-SA unless otherwise noted.