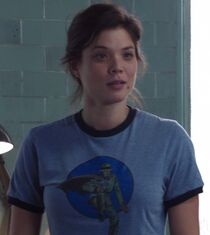 Nikki is a coroner for the San Francisco Police Department. We see her for the first time on the episode "Paxton Petty" wile she's examining the victims of the Pine Street Park bombings. Nikki is also a big fan of comics including The Sandman. And Diego Soto seems to really like her after seeing her Sandman The Golden Age T-Shirt. Later on she also ask's Rebecca if she saw "Psycho" there. It also looks like Rebecca Madsen and Nikki are good friend as they have been seen playing billiards together. Rebecca also menssioned to have family issues to Nikki before they get called away to look at Webb Porter's first victim.

1 of 7
Add photo
Retrieved from "https://alcatraz.fandom.com/wiki/Nikki?oldid=10801"
Community content is available under CC-BY-SA unless otherwise noted.