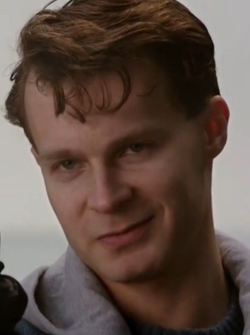 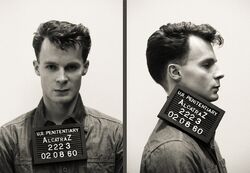 Petty was born in 1934.He later Joined the Marines at age 18 in 1952, he became a combat engineer in the 15th unit, and somehow took part in the Chosin Reservoir battle but was not awarded a silver star. Despite clearing frozen minefields by himself under heavy fire, Petty was not one of the 14 veterans who were awarded a Silver Star medal afterwards.

Petty realised that children were also being used to place bombs in the field. He therefore went to the village of Wonju, and planted landmines in their playground and water sources. Due to his actions, he was court martialed, and reassigned to the Presidio graveyard during the investigation. Consequently, he was tried and convicted, serving five years in military prison, during which he continually wrote letters to his superiors asking for a Silver Star, only to be denied every time.

Following his military incarceration, Petty returned and began bombing parts of San Francisco. He planted multiple landmines in four different locations around the city - Beard Field (6 March 1960), Grace Cathedral (15 March 1960), Union Square Snow Festival (20 February 1960) and Mount Sutro. The first three caused heavy casualties, but the fourth was never discovered as the Sutro was sold to the state, meaning that no-one could access the bomb until the 1990s.

Petty was arrested on 3 September 1960 and was sent to Alcatraz. He was greeted by Lucille Sengupta, Milton Beauregard and Edwin James, who subsequently began torturing him for the location of his undetonated fourth landmine, at Mount Sutro. Lucille Sengupta attempted to extract the information without Petty knowing after Beauregard's drowning techniques did not yield any results.

Petty was lightly electrocuted and began singing a Korean lullaby. It was recorded on tape by Sengupta and given to Tommy Madsen, an inmate who served in the Korean war, for identification. Madsen told Sengupta that one word in every line of the song indicated a different location of a minefield.

Consequently, Sengupta managed to extract information regarding the locations of Petty's bombs. One word in each line of the lullaby - Beard, Grace, Snow and Twin Trees - contributed to one location of Petty's landmine bombings - Beard Field, Grace Cathedral, Union Square Snow Festival and Mount Sutro. Sengupta managed to prove her theory as the bombs in Beard Field, Grace Cathedral and Union Square had been found, although the case of the unknown fourth location, "Twin Trees," was given to SFPD officer Emerson Hauser for analysis. He managed to solve the cryptic clue and find the fourth batch of landmines at Mount Sutro. They were detonated safely without any casualties.

Presumably, Petty served time in Alcatraz to await his trial for multiple bombings, which could have been scheduled for after 1963. It was possibly for this reason why Diego Soto did not write about him in his book, Inmates of Alcatraz, despite having knowledge about him and his crimes.He was last seen in his cell listening to Webb porter play his violine.

On 13 February 2012, four landmines went off at the Pine Street Park. The Alcatraz Task Force immediately identified the culprit at Paxton Petty. Rebecca sights Petty on the run, but after a chase, Petty sets off another landmine and rolls it towards Madsen, causing her to jump aside to avoid it. After Petty managed to get away, Rebecca Madsen's friend from the SFPD Bomb Squad, Matt Tanner, showed her and Diego Soto some parts of shrapnel, which were later identified as parts of a military medal.

In payback, Petty had been using parts of the Silver Star military medal as extra bits to create more carnage. Madsen and Soto found his secret stash of mines and bomb disguises in the mausoleum at the Presidio graveyard, where Petty had been assigned to while his investigation regarding the Wonju bombings were pending. Petty had been there just before Soto and Madsen explored the area, where he killed a security guard and painted some of his landmine bombs in a sandstone colour. Petty also sent a ransom note to the government demanding $651,000 dollars of unpaid pension, due for his service in the Korean War, for the locations of the mines.

Emerson Hauser managed to track the future areas where Petty would plant bombs, by unearthing a second verse to his Korean lullaby - "Little Brook in the Woods." He set Madsen and Soto to the playgrounds at Windward Elementary, while he himself went to Sunset Beach. Both were mentioned in the lullaby and therefore were considered Petty's next targets.

Hauser almost managed to corner Petty at Sunset Beach, where he was planting his sandstone painted landmines. However, when he accidentally stepped on one, Petty ordered Hauser to give him his phone and gun. Hauser obliged, and was stranded on the beach with one foot on the landmine, unable to move away in danger of detonating it.

Soto and Madsen finally cornered Petty at the Windward Elementry. When Madsen attempted to call Hauser to inform him, she heard his phone inside Petty's pocket. Holding him at gunpoint, Madsen asked where Hauser was, however Petty did not oblige.

Madsen reincarcerated Petty in his cell at Alcatraz. Petty demanded to know what had happened to him and why he was in 2012 all of a sudden. He also confirmed that he awoke in the Presidio mausoleum, backing Soto and Madsen's claims beforehand. Madsen then discovered the secret of the Korean Lullaby.

As Madsen and Soto arrived with Petty at Sunset Beach, Tanner and his bomb squad attempted to dismantle the mine under Hauser's foot, despite Petty's subtle claims that it was impossible. Tanner later realised that since Petty had modified the mine, the booster and detonator could not be taken apart without touching the main charge, making it almost impossible for the bomb to be dismantled. This was proven when Tanner was killed by the bomb, even though he thought he dismantled it. Hauser, who was saved, shot Petty in the leg as revenge.

Agonized by the pain, Petty attempted to falter Hauser's confidence by referring to the "undetonated" bombs on Mount Sutro. Hauser dismisses Petty's claim, telling him that he had detonated that bomb with no casualties in the 1990s. Petty recovered from his leg wound, and was incarcerated in New Alcatraz, where he made a recording. He was comforted by the arrival of Webb Porter and his violin music. He was last seen in garrett stillmans episode for a brief moment.

Retrieved from "https://alcatraz.fandom.com/wiki/Paxton_Petty?oldid=11015"
Community content is available under CC-BY-SA unless otherwise noted.