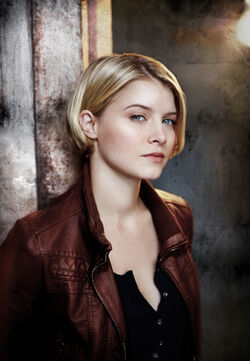 Detective Rebecca Madsen is the "smart, thoughtful, but slightly obsessive" police detective, working alongside Diego Soto. At the end of the first season, she is implied to be dead, though the episode does not continue after a doctor pronounces time of death.

After the death of her parents, Madsen was raised by Ray Archer, a former Alcatraz guard and retired police detective. Partly because of his influence, she became a police officer, and eventually a homicide detective where she was partnered with Detective Will Peters. During the opening scene of the first episode, Peters falls to his death during a chase involving an unknown suspect who later become known as Madsen's grandfather.Madsen's grandfather was Thomas Madsen, an Alcatraz prisoner. He was one of the "63s" who disappeared from Alcatraz. Until the arrest of Jack Sylvane, Madsen believed her grandfather was a guard at Alcatraz, not a prisoner. Rebecca was at a homicide and met Emerson Hauser, who insists she and the police leave. Angrily, she obeyed, calling him a dick on the way out. Rebecca finds out that Ray Archer is her real great-uncle, the brother of her grandfather.After leaving the mental hospital, Tommy led Rebecca on a high-speed chase through San Francisco's hilly streets. Rebecca stopped Tommy's car by rear-ending it, after which she pulled him free of the exploding wreck. Tommy confessed their blood relationship, after which he explained (from his perspective) the reason he killed her partner, Peters-- Peters was paid to keep an eye on her. Tommy then distracted Rebecca, and stabbed her in the gut. He escaped using the blue Mustang Rebecca had commandeered from a citizen. Immediately after, Diego Soto drove up and called emergency services. Rebecca was taken to a San Francisco hospital, where she was taken into surgery. At the end of the first season, it is implied that Rebecca Madsen died of the injuries sustained in the stabbing. Her heart rate flatlined, and a doctor's voice was heard pronouncing time of death.