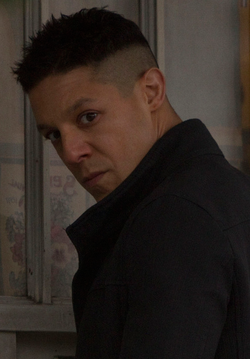 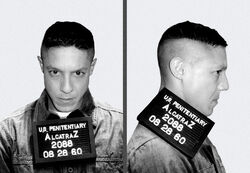 Sonny Burnett was a kidnapper nicknamed "Shotgun". He got a woman named Helen who was his girlfriend to go out on the middle of the street and cars would swerve out of the way and crash. He would bring a shotgun and kidnap the surviving car crash victims, ringing their families and blackmailing them into paying him afterwards. He always returned the victims safely after the ransom was paid. One night he got drunk and told Helen where he'd hid the money he'd stolen. When she escaped and gave Sonny up to the police, she took the money while he was incarcerated in Alcatraz Prison.

While Burnett was in Alcatraz, he asked for protection from an inmate named Hicks. In exchange, Burnett offered Hicks a hundred thousand dollars that he had hid before being captured; however, when Hicks' men did not find the cash, Hicks angrily stabbed Burnett, nearly killing him.

Some time later, Burnett beat one of Hicks' men, Artie Yanowsky, and later had his revenge when he ripped Hicks' eyes out.

After resurfacing in 2012 Sonny Burnett kidnapped the husband of the woman who had once been his partner, as he sought revenge on her for betraying him. He stood in the middle of the road in front of her husband's car, deliberately causing her husband to swerve off of the road while trying to avoid him and crash. He then murdered the passenger with a shotgun blast to the chest before holding her husband to ransom. Even though Helen complied, he murdered her captive husband anyway by using a power saw to behead him, and then left the severed head in a barn for the FBI to find after directing them there. He then broke into Helen's house, killing the two police officers assigned to watch over her, and taunted her about what he had done to her husband. Leaving her in tears, he then kidnapped and buried alive her daughter, Danielle, in a field. While driving away from the field in question, he was ambushed and caught by the police, and Danielle was exhumed from the field before she could suffocate and rescued. Sonny was then transferred to New Alcatraz where his blood was given to Dr. Beauregard. He was last seen in Garrett Stillman (episode) for a brief moment.

Retrieved from "https://alcatraz.fandom.com/wiki/Sonny_Burnett?oldid=11019"
Community content is available under CC-BY-SA unless otherwise noted.