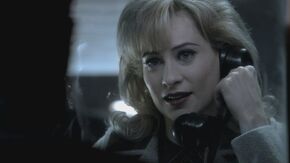 Despite her husband's incarceration, Sonya still showed signs of love until 1960, when she begged for a divorce during visiting time, in order to marry Jack's brother, Alan Sylvane, and to also combat her extreme poverty and lonliness. Alan & Sonya Sylvane married, despite Jack's disappointment, and had a son, Alan Sylvane, Jr.

Sonya died from cancer in 2008, 3 years before Jack Sylvane comfronted his brother. On Jack's orders, his brother Alan took him to her final resting place, a graveyard in San Francisco, where he forgave her and declared his continued love for her. Jack was then caught by Rebecca Madsen.

Retrieved from "https://alcatraz.fandom.com/wiki/Sonya_Sylvane?oldid=8402"
Community content is available under CC-BY-SA unless otherwise noted.