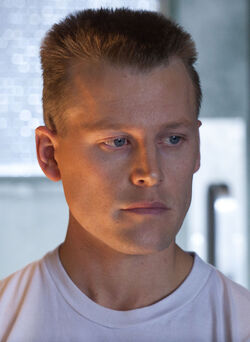 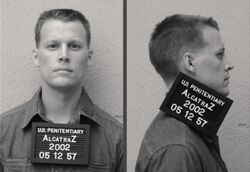 Thomas "Tommy" Madsen is a supposedly deceased, former Alcatraz inmate who disappeared in 1963. He is Rebecca Madsen's grandfather. Rebecca believed her grandfather to have been a guard at Alcatraz until she saw his photo in the Census room.

Tommy Madsen was born in 1934 in San Francisco, CA, to William and Laura Madsen, and later became the older brother of Ray.

Before leaving to serve in the Korean War, Madsen married his high school sweetheart, Agatha. He served in Korea between 1952-1953, and the following year, he fathered his first and only son, Van Madsen. In 1957, Madsen murdered his wife for an unknown reason by putting a gun in her mouth and pulling the trigger, leaving his son behind. He was incarcerated in Alcatraz on May 12, 1957. ("Ernest Cobb")  ("Tommy Madsen")

Three years after Tommy's incarceration, Ray applied to become a guard, but changed his last name to Archer to avoid being connected to Tommy. Once Tommy recognized Ray at the mess hall, he attacked him, telling him he should not have followed him to Alcatraz. Ray's commanding guard, Guy Hastings, suspected the two knew each other, and instructed Ray to attack Tommy to prove the contrary. At the infirmary, a beaten Tommy was visited by Ray, who told him they are in it together. ("Guy Hastings") Madsen was not liked by the lead doctor, Beauregard, who punished him by taking large quantities of blood from him. During one of his overnight stays at the infirmary, Madsen spoke to Jack Sylvane from the other side of the curtain. Introducing himself as #2002, Madsen revealed to Sylvane that there is another level below "the Hole," and predicted that "something terrible is going to happen here." ("Kit Nelson")  ("Pilot") After Kit Nelson was beaten in the recreation yard by fellow inmates, Madsen, once again having blood taken from him, chatted with Nelson and warned him about Beauregard. He also told Nelson of the prisoner hierarchy at Alcatraz, where child killers like Nelson are at the very bottom. ("Kit Nelson") Madsen was also questioned about a lullaby sung by Paxton Petty after he was electrocuted by Dr. Sengupta. Due to his service in Korea, Tommy realized it was a lullaby, which was used by both sides in the war to tell fellow soldiers where landmines were buried. One word in each line of the lullaby contributed to a minefield location. Petty's lullaby featured the locations of his bombs he planted before he was incarcerated in Alcatraz. A second verse in the lullaby indicated Petty's target locations when he resurfaced in 2012. He was later seen again having blood taken from him. Ray visited him after the Ames brothers were incarcerated from there escape. He told him that he will find out "what they're doing to you."

Madsen was taken out of Alcatraz by the warden after he had blood "returned to him". The warden required Madsen to complete a task and granted him in return "one perfect day". Madsen defined as part of "perfect" the opportunity to see his son, Rebecca's father, Van. On seeing his father, Van ran into his family's house. Following this, Madsen was able to articulate what he wanted from the warden.

What he wanted was the opportunity to draw up adoption papers to permit Ray to adopt Van, as well as the termination of Ray's employment on Alcatraz. He also presented the papers to Ray himself, allowing Tommy some sort of chance to say goodbye.

In return for this favor, Madsen agrees to act as "advance man" for the warden's plot. ("Tommy Madsen")

It is implied that Madsen never "disappeared" with the rest of the 63's, but instead acted as an "advance man", living through the intervening years and getting things ready. However, this may also imply that Madsen was the first one of the 63's to make "the jump". And it was said that Tommy died in 1964.

Following his reappearance in 2012, Tommy was chased by Rebecca Madsen, his granddaughter and police detective, and her partner, Will Peters. Tommy kicked Peters' hand loose, who then fell from the rooftop to his death. Before escaping from the shocked Rebecca, the two exchanged glances. ("Pilot")

Three months later, Rebecca, who was told by Ray that her grandfather was a guard at Alcatraz, discovered the truth about Tommy at Emerson Hauser's census room, and realized that it was her grandfather who killed her partner. ("Pilot")

Tommy and Ray appeared to have stayed in touch. A few weeks later, Guy Hastings reappeared, and kidnapped Ray in search of Tommy. Ray took him to their childhood home, where Tommy was supposedly hiding. After Guy's capture by the Alcatraz Task Force, Tommy approached Ray at his bar after hours. Ray stated that he told him to never come back, but Tommy stated that since his hiding place has been revealed, he had to find a new one. Tommy reminisced how Ray used to protect him in the past, to which Ray responded that now he has to protect Rebecca. When Tommy jokingly commented on being a grandfather at his age, Ray coldly responded he was "nobody's grandfather," and ordered Tommy to get out of his bar. Tommy announced that "it isn't over," but Ray warned him that if he sees him again, he will kill him. ("Guy Hastings")

Tommy again brought himself to Rebecca's attention as the "handler" in a mission some 63's undertook to find Garrett Stillman, and again when he kidnapped Georgia in order to access a mental hospital. Tommy was looking for a key, which he missed because it was sewn into a pants hem. ("Garrett Stillman")  ("Tommy Madsen")

After leaving the mental hospital, Tommy led Rebecca on a high-speed chase through San Francisco's hilly streets. Rebecca stopped Tommy's car by rear-ending it, after which she pulled him free of the burning wreck. Tommy confessed their blood relationship, after which he explained (from his perspective) the reason he killed Peters-- Peters was paid to keep an eye on her and implied Warden James' role in the return of the 63's.

He went through the motions of obeying Rebecca when she attempted to arrest him, but kept talking. He asked about Van and about Rebecca's mother. He asked if Rebecca knew how they died.

When Rebecca was distracted, Tommy stabbed her in the gut and escaped using the blue Mustang Rebecca had commandeered from a citizen. ("Tommy Madsen") 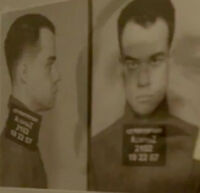 1 of 19
Add photo
Retrieved from "https://alcatraz.fandom.com/wiki/Tommy_Madsen?oldid=11010"
Community content is available under CC-BY-SA unless otherwise noted.