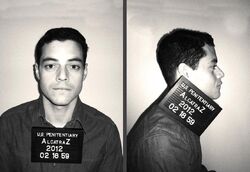 His mother tried to drown him when he was six resulting in him having hatred toward women as well as tinnitus.

When he was six years old, his mother tried to drown him in a bathtub. Later, in 1959, he killed her and four other women in one night. After being sent to Alcatraz, Porter sobbed in his cell all night long. Warden James had no choice but to put him in a private cell. Warden James hired Dr. Lucy Sengupta to help with Porter. She found out he suffers an auditory disease that made him attracted to the noise made by Dr. Beauregard's refrigerator, which was against the outside wall of his cell. So they turned it off and instead they put on violin music, which played while his mother attempted to drown him. He told Dr. Sengupta details about the drowning. After hearing this,Dr. Sengupta walks Porter down to the music room. In the music room, E.B. Tiller was listening to the music of a prison band when Porter and Dr. Sengupta walked in. The inmates stopped playing and insulted Porter as he walked to the instrument room. He found the violin. With his first attempt he could barely play. With his second attempt, just moments later, he was able to play it with skill. In the recreation yard, Dr. Sengupta and Porter were talking about Porter being transferred back to his cell in general population. Webb Porter asked, “Why are you doing this for me?” Dr. Sengupta answered, “I think a man can change, has the right to change.” The inmates insulted and yelled at Porter while he walked past their cells, on the way back to his cell. Once locked back inside, he started to play his violin. All inmates such as Ernest Cobb, Jack Sylvane, Kit Nelson, and Paxton Petty, listened. Everyone, including, guards, staff, and inmates cheered.

Shortly After arrival in 2012 Porter began killing again, and started to use the hair of his female victims to string his violin thinking it would allow him to play better and be able to play for people again. Eventually the Task Force caught up with him, and he was detained, before being placed into the New Alcatraz cell block he donated some blood for Dr. Sengupta, he currently resides on the New Alcatraz cell block and still plays his violin much to his fellow inmates Jack Sylvane Ernest Cobb and Paxton Petty joy.

Retrieved from "https://alcatraz.fandom.com/wiki/Webb_Porter?oldid=11022"
Community content is available under CC-BY-SA unless otherwise noted.