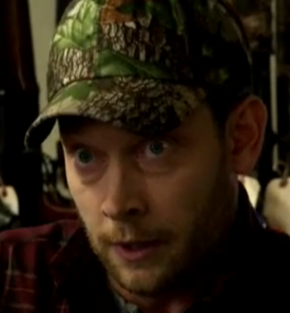 Whitten was a worker in a specialist weapon shop, who was a former licensed gun dealer. He was recognised by Detective Madsen after she, Diego Soto and Lucy Banerjee entered his shop. He legally works at the shop despite his license confiscation by the ATF, as all his wife's licenses are up to date. He was involved in a police case lead by Madsen, which possibly resulted in the withdrawal of his licenses.

Whitten was reapproached by Madsen in 2012 to provice information about Ernest Cobb, a former inmate of Alcatraz who dissapeared along with all the other inmates in 1963. Whitten confessed that Cobb did indeed purchase a Whinchester 1970 model sniper rifle, being the first in 10 years to do so, a few weeks before his first shooting. The security footage showed Cobb buying the weapon, and also allowed Madsen to track him down to a hotel due to the key he was carrying in his wallet during the transaction.

Retrieved from "https://alcatraz.fandom.com/wiki/Whitten?oldid=6713"
Community content is available under CC-BY-SA unless otherwise noted.